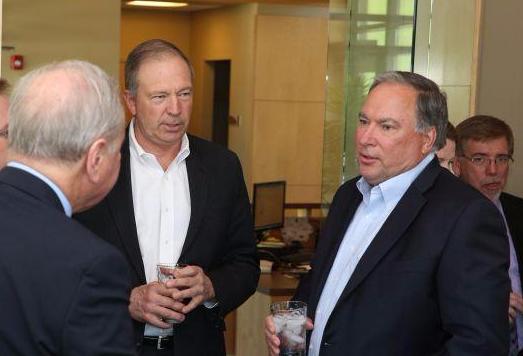 On Tuesday, May 2, Agribusiness Association of Iowa (AAI) CEO, Joel Brinkmeyer, met some of the Mark Pearson FFA Leadership Scholarship recipients at a reception in Des Moines at the Community College Trustee Building.
The reception allowed the students to make connections with scholarship donors groups, including AAI. Students also had the opportunity to interact with the Pearson family.
The AAI Foundation was an initial donor to the scholarship program at Des Moines Area Community College. Iowa Governor Terry Branstad announced this new statewide scholarship for Iowa FFA Presidents in April of 2016 at the Capitol Building. The foundation is making a $30,000 donation to the fund over the next three years. Other initial donors include: Dennis Albaugh, WHO Radio, Iowa Farm Bureau Foundation, Iowa Association of Bureau and Industry, and Mary J. Duote.
The Mark Pearson FFA Leadership Scholarship pays two years of tuition for any Iowa FFA chapter president who attends DMACC. During the past school year, 23 students took advantage of the opportunity. In the upcoming school year the scholarship will be used by more than 40 additional chapter presidents. Iowa has 232 FFA chapters.