Following receipt of a letter from the National Telecommunications and Information Administration (NTIA), the Federal Communications Commission (FCC), revoked the conditional waiver granted to LightSquared.  The FCC had awarded the waiver in 2011 and it prohibited LightSquared from offering commercial service until interference concerns were resolved. In their letter, NTIA concluded that “LightSquared’s proposed mobile broadband network will impact GPS services and that there is no practical way to mitigate the potential interference at this time.”

“LightSquared’s proposal to provide ground-based mobile service offered the potential to unleash new spectrum for mobile broadband and enhance competition. The Commission clearly stated from the outset that harmful interference to GPS would not be permitted. This is why the Conditional Waiver Order issued by the Commission’s International Bureau prohibited LightSquared from beginning commercial operations unless harmful interference issues were resolved,” FCC Spokesperson Tammy Sun shared in a statement on Tuesday.  “This proceeding has revealed challenges to maximizing the opportunities of mobile broadband for our economy. In particular, it has revealed challenges to removing regulatory barriers on spectrum that restrict use of that spectrum for mobile broadband. This includes receivers that pick up signals from spectrum uses in neighboring bands.” 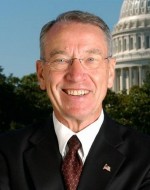 Since last April, Senator Chuck Grassley of Iowa has asked the U.S. Federal Communications Commission for documents related to the agency’s decision to fast-track the LightSquared broadband wireless project, despite concerns of widespread interference with global-positioning system devices. Iowa Senator Chuck Grassley released the following statement on the decision, ““The FCC’s action seems to acknowledge the point I’ve been making since April.  Prematurely granting a conditional waiver in a rushed process is not the way to get the right result.  Now that the interference issue is settled, we need to find out more than ever why the FCC did what it did.  The agency put this project on a fast track for approval with what appears to have been completely inadequate technical research.  After all of this time and expense, still, no one outside of the agency knows why.  That’s not the way the people’s government should work.  The public’s business ought to be public.  Now that the FCC has backtracked on LightSquared, I’d like to see my Senate colleagues join my document request, especially the chairman of the only Senate committee that the FCC is willing to answer.  If we don’t find out how and why the FCC failed to avoid this controversy, then it will keep operating as a closed shop instead of the open, publicly accountable agency it should be.”

After the FCC’s decision, rumors of impending bankruptcy started to circulate.  LightSquared is the biggest investment of the Harbinger Capital Partners fund. “It is clearly not on the table,” said fund manager Phillip Falcone in an email to Reuters on Wednesday in response to the rumors.  On Thursday, The Wall Street Journal reported that LightSquared is pursing the possibility of swapping spectrum with the Defense Department as a way to move forward.

The Take Five weekly email newsletter keeps the agribusiness industry in Iowa up to date on AAI efforts and shares insight on the week’s news.