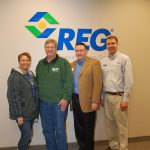 Environmental Protection Agency Administrator Lisa Jackson and Agriculture Secretary Tom Vilsack met with farmers in Iowa on Tuesday to discuss EPA and USDA’s joint efforts to ensure that American agriculture continues to be productive. Jackson and Vilsack highlighted the cutting-edge conservation measures producers have pioneered over the past decades and met with renewable energy leaders to discuss agriculture’s role in making the nation more energy secure.

“These opportunities to talk with farmers on their land and see their operations at work are incredibly valuable. Open communication and transparency are the essential first steps toward protecting air and water quality and ensuring the health of farming communities,” said EPA Administrator Lisa P. Jackson. “Agriculture is part of the foundation of the American economy. EPA’s mission to safeguard clean air, clear water and productive land is a critical part of sustaining farming jobs and productivity, and it’s vital that we communicate and work together on these issues we share.”

“The farmers and ranchers we visited with – and hundreds of thousands like them around the country – are our nation’s first and finest conservationists. They understand better than anyone that you
cannot continually take from the land without giving back and they have taken incredible strides to protect the land they rely on,” said Agriculture Secretary Tom Vilsack. “USDA will continue to work hand-in-hand with EPA to ensure that both agencies are pursuing common-sense regulation that will let farmers make the decisions they feel are best for their own operations.”

For video of the tour and additional interviews with Secretary Vilsack and Administrator Jackson, go to AAI’s YouTube page at:

On Tuesday, April 19, the Renewable Energy Group (REG) hosted USDA Ag Secretary Tom Vilsack and EPA Administrator Lisa Jackson, at their 30 million gallon per year biodiesel plant in Newton, Iowa. Also on hand were representatives from Green Plains Renewable Energy (GRPE) and POET. While on site, Vilsack and Jackson learned about the role biodiesel, ethanol and advanced biofuels will play in meeting Obama’s energy goals and the benefits of biofuel production to the country including job creation, rural development and lower prices at the pump.