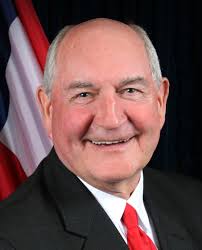 Agriculture leaders and trade groups alike awaited the announcement from President Trump on his nomination for the US Secretary of Agriculture. On Wednesday night, former governor of Georgia Sonny Perdue was formally nominated to fill this role.

The American Farm Bureau Federation (AFBF) strongly endorsed Perdue saying he has a strong background and commitment to the business of agriculture. Vice President of AFBF Scott VanderWal says, “Our national President Zippy Duvall knows him very well, worked with him when he was governor of Georgia. He’s an agriculturalist from his background, he’s a veterinarian and our people that know him from when he was governor say that he really worked well with agriculture and he understands the issues.”

The American Feed Industry Association is also endorsed Perdue’s nomination. AFIA reports the organization worked with the USDA on a broad slate of issues such as trade and implementation of the farm bill. We believe Gov. Perdue’s political and agriculture-related background make him a sound fit for the role.

Iowa had hopes that Iowa Secretary of Agriculture Bill Northey would be his nomination. Senator Chuck Grassley, R-Iowa, had openly voiced his support for Secretary Northey to fill the position. Grassley, had urged Trump to pick a northerner. Grassley has battled for years with southern legislators over the size of commodity support payments. In an article from the Gazette, earlier this week, Northey’s only comment on the topic was “Certainly, if I got a call I would be interested in talking,” Northey said. After the nomination announcement, Northey states that Purdue has a strong background in agriculture, he says, “Governor Perdue has a very good reputation within the ag industry and I look forward to working with him as he leads USDA.”

Iowa Senator Joni Ernst says, “As a veterinarian, Mr. Perdue understands the agriculture industry, and has executive branch experience as a former governor. I look forward to thoroughly vetting him for this position before our committee.” Other ag leaders issue statements on Predue as well. In the end, President Donald Trump’s selection of Georgia Republican Governor Sonny Perdue for the US Secretary of Agriculture has been overall well received by all.

Perdue was born on a farm and was a veterinarian before becoming a two-term governor in Georgia serving from 2003 to 2011, where he was the first Republican to be elected as governor for more than a century. His key agricultural issues there while governor were water management and making changes to the tax code to help farmers.

Purdue was a founding partner for a grain merchandising company with elevators in Georgia and South Carolina and formed a trading company in 2011 focusing on exports.

Before the nomination, Perdue served on the Governor’s Council of the Bipartisan Policy Center in Washington D.C.