On April 9, Brinkmeyer, Vaughan, and Mark Rosenbury, former AAI Chair and former CFO of Terra Industries (now CF Industries), met with CF Industries plant manager Nick DeRoos at the Port Neal plant, along with Plant Production Manager Greg Kennette and members of Nick’s team.
The AAI team had an opportunity to tour the modernized and expanded facility that had an overall construction cost of more than $1.8 Billion and is now in full production. The plant produces anhydrous ammonia, urea, liquid nitrogen, and other co-products, and is one of the largest and most modern fertilizer manufacturing facilities in the world.
CF Industries is an active AAI member and has recently partnered with The Nature Conservancy to develop the 4R Plus program in Iowa, along with The Fertilizer Institute (TFI) and AAI’s support. 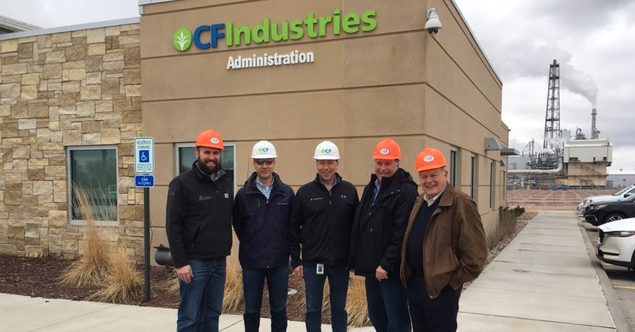 Vaughan, Brinkmeyer, and Rosenbury met with AAI member, David Schramm, and his sales staff at OCI Fertilizers in their sales offices in Sioux City, Iowa. The group discussed the competitive nature of the industry, OCI’s world-class new fertilizer manufacturing facility in Wever, Iowa, and new opportunities ahead for the fertilizer industry in general. The plant in Wever, Iowa, is the first greenfield nitrogen fertilizer facility constructed in the United States in more than 25 years.
The Wever facility is now fully operational serving Iowa and the upper Midwest ag industry. The group also discussed AAI’s recently developed of the Iowa Agribusiness Environmental Partnership (IAEP), membership activities, and issues of importance to the fertilizer industry.
Last month, Iowa Fertilizer Company (OCI), was named the winner of the Exida Safety Award, recognizing the company’s longstanding commitment to the safety of its operations, employees, and the community at large.