The AAI Foundation is a bronze level donor ($30,000 will be given over three years) to the Mark Pearson FFA Leadership Scholarship. The Mark Pearson FFA Leadership Scholarship will provide a full-tuition scholarship to 42 Iowa FFA Chapter Presidents who attend DMACC this fall. This is the second cohort of Mark Pearson Scholars. To qualify students must have been an FFA Chapter President during their junior or senior year in High School, plan to attend DMACC directly after graduation, and be enrolled full-time in a degree program. Recipients can choose any of DMACC’s 160+ majors.

“We are proud to honor the legacy of Mark Pearson and recognize the leaders of FFA Chapters across the state of Iowa. This new scholarship will help build the next generation of community leaders,” said DMACC President Rob Denson.

Honoring a Legacy of Promoting Agriculture 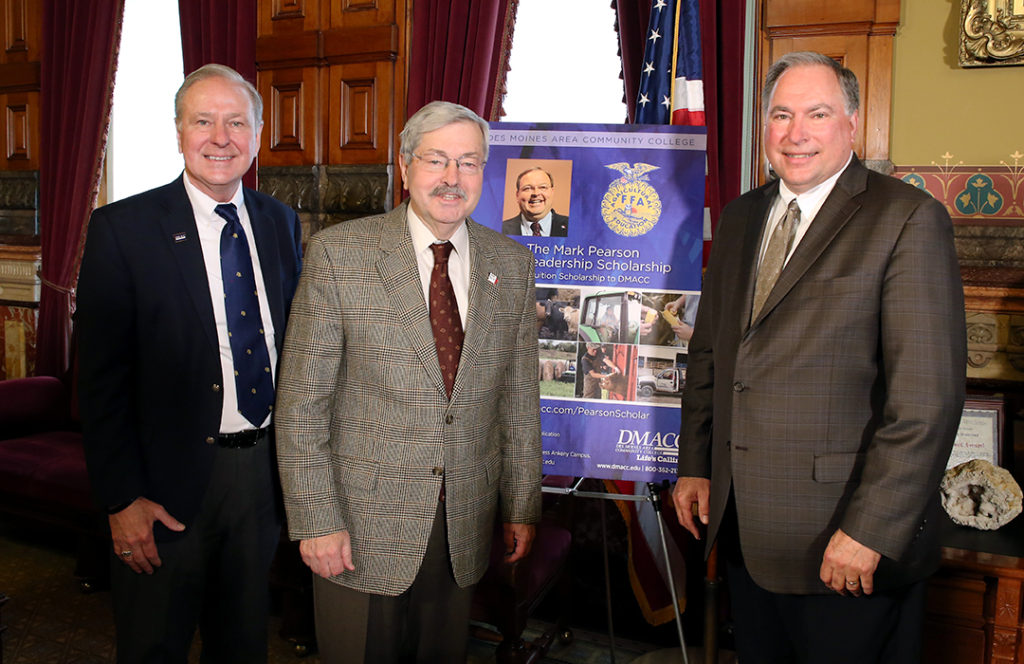 Mark Pearson was a longtime farm broadcaster. He hosted Iowa Public Television’s “Market to Market” for more than 20 years and was also the host of WHO Radio’s “The Big Show.” Pearson was also a Madison County farmer. He passed away in 2012 at age 54. The Mark Pearson scholarship was established by DMACC and Mark’s family. In April of 2016, then Iowa Governor Terry Brandstad announced the scholarship in the governor’s office of the Iowa State Capital building.

The AAI Foundation along with a dozen other organizations and individuals provided the initial donations to start the Mark Pearson FFA Leadership Scholarship.

“I remember Mark as a promoter, motivator, and a friend to everyone in agriculture,” said Agribusiness Association of Iowa Foundation CEO Joel Brinkmeyer. “I think this is a tremendous way to honor his legacy and his family,” 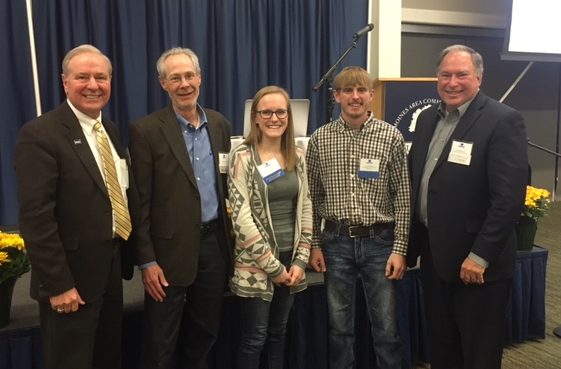 Brinkmeyer and Morrissey had the opportunity to visit with several of the scholarship recipients at the event and share time with DMACC President Rob Denson. Pictured above are two of the 42 students that received the Pearson Scholarship, Macy Janssen of the Waverly-Shell Rock FFA Chapter 2016-2017 in Shell Rock, IA and Zachary Hummel of the Westwood FFA Chapter 2015-2016 in Hornick, IA.

About the AAI Foundation

The AAI Foundation promotes research projects, member education, stewardship and scholarships that benefit AAI members and their families. The charitable goals of the Foundation reflect the interests of the agribusiness industry and benefit AAI members by promoting research projects, member education, stewardship and higher education scholarships. Within these three areas, the Foundation assists applicants as it is related to the benefit of the agribusiness industry.